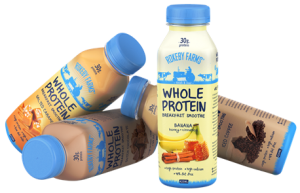 Rokeby Farms has found fresh success with its range of Whole Protein Breakfast Smoothies securing additional distribution in more than 2,000 key retailers nationally in the Petrol and Convenience channel.

Rokeby Farms innovative new product range is made with fresh, cold-filtered milk that contains twice the protein of regular milk and no added powders – an Australian market first which meets the demand for quality high-protein products.

Rokeby Farms was established in 2014 by MADE, a pioneering independent beverage company that first launched NutrientWater in Australia in 2005 and later led the coconut water revolution with Cocobella in 2010 and now Rokeby Farms.

Rokeby Farms sources fresh milk from a selection of farms located in and around Rokeby – a small town nestled in the heart of Gippsland, Victoria. The fresh milk is delivered to its new manufacturing facility located in Melbourne where MADE has invested $12m in a state-of-the-art beverage processing plant.

MADE Co-founder Luke Marget said “We are so thrilled with the ranging support given from our key retailers who recognise the long term vision we have for Rokeby Farms and the capital commitment we have made for a company of our size.”

The key to its success lies in its innovative cold-filtration process that removes some of the naturally occurring water from the milk leaving fresh high-protein milk with twice the protein and calcium of regular milk. MADE sees the ability to create a fresh liquid breakfast drink that is not packaged in UHT as a real advantage in the Australian market where recent research shows that Australians prefer fresh milk to UHT products.

Ready to take the next step?

Speak with one of our consultants today.
ENQUIRE NOW »