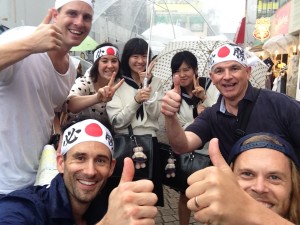 On Wednesday 23rd September 35 of our staff members boarded flights to Tokyo, Japan from airports all around Australia for our eagerly anticipated annual Made Conference 2015.

Since Made’s inception the annual conference, where the national teams have a chance to catch up, meet new faces and bond over an agenda packed with team activities has always been a highlight of the calendar. The half day conference where the team hear updates from the business leaders and about future plans is a fantastic opportunity to share our wins, learn from our challenges and ultimately realign on the strategy for the year ahead.

Once each team arrived in Tokyo we set off for the first of many suprise activities. Heading for the Ryogoku area – home to Tokyo’s Sumo Wrestling stadium gave some clues on what was in store. After a traditional sumo-sized lunch of ‘Chunkonabe’, a Japanese hot pot with chicken, fish, tofu and vegetables which the wrestlers eat in sizable quantities to gain weight we were taken into a private room to watch ex-wrestlers perform a demonstration to learn the rules and techniques of Sumo Wrestling. As we could have guessed, next it was our turn! We donned oversized novelty sumo costumes, separated into teams and went head to head (or gut to gut) in a tournament. There were lots of laughs, surprising defeats and not so surprisingly with our competitive team – a trip to the emergency room with a dislocated knee!

Next it was off to see how the professions do it in competition at the Grand Sumo Tournament where we watched the action from the grandstands over some Japanese beers and wines.

After working up an sumo-size appetite we were treated to an incredible dinner at Mon Cher Ton – one of the first and finest Teppenyaki restaurants in Tokyo where we the traditional Japanese cuisine was prepared and served right in front of us at each of our private tables. A meal none of us will forget.
Day two started off with our team conference where we heard from our sales, finance, manufacturing
and marketing teams – an invaluable opportunity to discuss performance and also the future plans for each function as well as give recognition to the team’s achievements and our longest serving staff.

After lunch we separated into our teams, donned our ‘Hachimaki’ (Japanese bandanas), and got our Selfie Sticks poised for the Made Tokyo Amazing Race challenge. Each team was armed with a set of clues and some Japanese Yen and then we were off and racing through the city – deciphering the cryptic hints, navigating the Metro and asking locals for help to reach our destinations (taking a team picture to prove it) before tackling the next challenge.  The activity provided a whirlwind tour of Tokyo by having to take a picture with a Harajuku schoolkid, finding the Hachiko statue at Shibuya crossing, locating the famed Omotesando shopping mall and locating a ‘Meji Jingu’ (lucky  charm) in the centre of the Meji Shrine Gardens. The race led us to Sake Fun Zokkon where our next challenge was to sample and correctly identify some of the more confronting local delicacies such as raw horse meat, and seasoned locusts. Most amusing was one of the team misunderstanding the challenge as to having to personally consume all eight dishes – a video well worth watching!

Then it was off to a Yakatabune, a traditional Japanese-style boat for a dinner cruise around Tokyo Bay for our final challenge – Karaoke of course! Treated to sushi, tempura and sake on low tables with floor cushions while each team selected their tune of choice, and discussed their performance for the evening. When we all had stitches from laughing the points were tallied and the winning team were awarded bottles of sake, chopstick sets and sushi knives as prizes.

We boarded the bus and headed for the stylish ‘A917’ bar in Tokyo Midtown for cocktails, followed by dancing ‘til all hours at super club, FERIA in Tokyo’s nightclub scene Roppongi to end what was another fantastic and memorable Made Conference.

Ready to take the next step?

Speak with one of our consultants today.
ENQUIRE NOW »